ONCE UPON A TIME…

…there were two little girls who weren’t afraid to get dirty. Peggy and Helen made mud pies and ran through creeks and blazed new trails through the scariest of vacant lots. As they grew up, they figured out they could make things in the dirt they loved so much. Tiny forts turned into fishing docks and party decks. The little girls wanted more, so they went to engineering school to learn how to turn their simple magic into true construction voodoo.

Most mud has worms, and the girls’ adventure opened a can of them. The worms weren’t squishy or slimy, but rather sneaky and tricky. For every marvelous discovery in how to make things stand up in the mud, someone appeared who told Peggy and Helen that good girls don’t play in the dirt. For every victory in building something to help people cross over really soft mud, a nasty boy appeared to tell the girls that mud-covered girls were sexy but not smart. And for every giant dam the girls constructed to make a lake for their neighbors to swim in, someone appeared to explain to them that girls don’t know how to do that.

Peggy and Helen were mad and frustrated, but they weren’t about to stop playing in the mud. They knew there were other girls out there who were getting dirty on purpose, and they just had to find them. If they all talked about how to handle the worms, maybe they could figure out a plan. And maybe they could just go on being who they wanted to be.

So the girls wrote a note on a piece of paper and made it into a kite. They flew the kite high and wide, and every time they reeled it back in, another girl had added to the note. Pretty soon, the kite was covered with all sorts of opinions on how all sorts of girls could handle worms in their own ways. Peggy and Helen read the notes, flew the kite, and figured out how to get rid of worms so they could go back to playing in the mud. Girls everywhere read the notes, and most of the worms got put back in the can. And life was as it should be – dirty and happy. 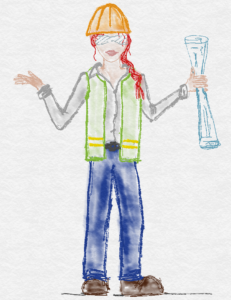