Anger We Know, Pain We Don’t 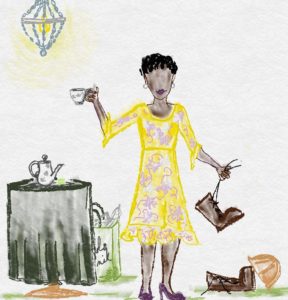 A few years ago, a friend talked me into online dating.  I successfully had resisted getting sucked into this activity for a long time, not because I disapprove or think it doesn’t work, but because it is in direct opposition to what I need and want from a relationship.  I hate being close-minded, though, so I caved.

The next month would have been comical if I didn’t have so little free time.  There was the guy who admitted he had no friends and spent most of his time hating his ex.  There was the guy who thought it would be “chill” to “hang” with me with his buddies because I knew the difference between a first down and a safety.  There was also the guy who proposed on the second date and texted me for over eight months despite the fact that I never responded to a single message after telling him that I wasn’t the face inside a heart outline on the Hallmark card of his life.

I stopped responding to any of the would-be suitors, (particularly the guy who collected spiders), but was too busy to go through the arduous process of shutting down the account.  One exhausting day, I was cleaning out the collection of e-mails I had gotten over the last week or so from the dating site, and one message caught my eye.  The guy in the photo had a captain’s hat perched on his head at an angle.  Sure enough, his profile identified him as living in a run-down area on the other side of the river where a motley collection of not-even-close-to-yachts were docked.  His message read, “Hey – what are you doing tonight?  Are you up to something or are you just sitting around bored with nothing to do?  I can fix that.”

I was incensed.  Not just repelled by someone to whom I wasn’t attracted, but furious in a way that was way out of proportion to a stupid little dating request.  I’m not in the habit of looking down on people, even when it’s someone who is beyond not my type. And it wasn’t the first time a guy I didn’t particularly care about asked me out, because I’m old and I’ve met a lot of guys over the years.

My anger was deep and volatile, and it manifested itself into an outrage that even I wasn’t expecting.  It wasn’t just the fact that I’ve never been bored in my life, and his invitation suggested I was uninteresting and couldn’t come up with something to do.  My visceral and sustained reaction came from the fact that he assumed that because I was a woman, I needed him to get something done, even if that something was just having fun.  My poor little life was incomplete and boring, but he, (a man), could fix that just because he was a man.

I was angry at this man for the same reason I’ve bristled every time an old guy on a jobsite was just sure that I wasn’t maintaining my vehicle properly just because I was female.  “I’ll bet you don’t remember the last time you got your oil changed.” It should have been funny.  Instead, the top of my head blew off, and I had to walk away. Every time.

I was angry at this man for the same reason I still can’t look at a certain neighbor who came into my front yard one day and tried to tell me how I should take care of drainage on my property.  “I know you’re an engineer, but…” This man knows nothing about drainage, but in his mind he knows more than me because he’s a man.  I couldn’t possibly handle my property if he weren’t there to give me his wisdom because I’m a woman and I live alone.

As much as I make light of this at cocktail parties and laugh at outrageous stories, I hate the feeling of being dismissed.  I hate being underestimated.  I hate knowing that a large sector of the population automatically thinks the list of things I can’t do is extensive and that my fluffy little brain is too flighty and delicate to understand the importance of tire pressure and transmission fluid.

I’ve thought a lot about my anger during the past few weeks. As much progress as women have made in the past 20 years, the guys in the jaunty captains’ hats are still out there.  But as infuriating as it is to feel dismissed, no one has ever looked at me negatively because they thought I was dangerous.  No one has ever decided that my presence could be detrimental to the moral and economic fiber of a community. I may have been asked in the past what man was going to guarantee my mortgage, but no one has ever eliminated me from consideration for living somewhere because I was undesirable.

There is a difference between being dismissed and being pushed out.  Black Americans know all too well what it feels like to be pushed out.  Despite my own anger, I can’t imagine what it feels like to be actively distrusted and treated as a hazard, a danger to “good people.” My life has never been in danger just because of how I look.  I may be frustrated, but there is little chance I will be physically harmed just for showing up. I know what it is to be overlooked and underestimated, but I don’t know the heartbreak of being hated every day for how I was born.  Black men are killed because small-minded people believe that their sad little lives will be more secure if they can direct their anger and frustrations at a physical target who history has shown society won’t defend.  Tragically, black women are burdened with racist hatred AND every woman’s handicap of being dismissed.  As exhausted as I often become when dealing with sexism, I do not know how black women get out of bed every day with such enormous weight on their shoulders.  If I am furious, their anger must be enormous.

When I was running cross country in high school, one of my teammates and I were out training on the road one day.  She happened to be black. A pickup truck suddenly screeched to a stop in front of us, and we were pelted with rocks and rotten fruit.  The truck sped away as the driver screamed ugly names at us and the passenger unfurled a Confederate flag with the KKK logo in the middle.

I was livid, and my dad was even angrier when I got home that night.  “You two need to run in the exact same place tomorrow to show them that their racism won’t win,” he said.  We did.  The Klan members didn’t show up again, and we celebrated what we thought of as a victory.

What I didn’t consider at the time was the fact that my friend might not have gotten off so easily if she hadn’t been with a white girl.  That rebellious inclination to get right back out there might have been possible because there was a much lower chance that something serious would happen to me.  The difference between a serious attack and some drama during our run was my white privilege.  The difference between me deciding to go “make a stand” and being a person who has known to be careful her whole life for fear of actually being injured was my white privilege.  I knew I had an advantage then, because my parents were anti-racists, even when such a thing was scarce.  But it has taken a lot of mileage for me to truly understand the head start I was given in life just by being white. It’s not fair, and it’s an advantage no one should have.

Here at Underpinnings, the pursuit of equal treatment for women is just one branch of our overall quest for equal treatment for everyone.  To seek equality just in terms of gender would be ludicrous for a person who truly believes in a fair and just society.  As with any project, the first step is to determine the most imminent danger and address it accordingly.  People being demeaned, degraded, and marginalized is an important problem.  People being killed is a critical problem.  I’m trying to do everything I can to take action where the problem is critical and do more internal evaluation where the situation is more subtle.  I will never be black, so I will never fully understand the experience of being the subject of hate just because my skin is dark.  But I do know what it feels like to be dismissed and overlooked just because of the way I was born, and I don’t like it. I don’t want anyone to feel this way or worse, and I think now is not the time to be divided by our supposed weaknesses but to be united by them. This is an ugly, complicated, messy problem, but that just means we have to work harder to fix it.