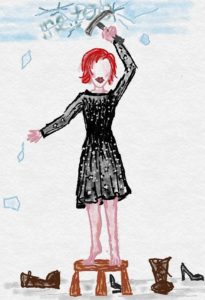 The recent Harvey Weinstein revelations, #metoo movement, and Time’s Up campaign have had a number of consequences, most of them quite fabulous.  Let’s start by saying that I have ZERO problem with the fact that a bunch of actresses finally brought attention to a problem a lot of us have faced for years.  Some women I know have complained that women in “fluffy” jobs are celebrating victory when women all over the world have been suffering with this scourge for millennia.  Seriously?  Do we care who caused the tide to turn?  I don’t.  If little green female leprechauns happen to be the ones to breach the dam of harassment because they complained about the male leprechauns grabbing their lucky charms, I don’t care.  Kudos to Ashley Judd and Reese Witherspoon and the others for speaking for all of us.  I’d thank them in person with a vat of chocolate chip cookies if I could.

Not surprisingly, the scandals have led to a lot of men claiming to not understand the rules.  Some of these guys are sincere and concerned that they have been doing things inadvertently that might make women uncomfortable.  Some of the men are irritated that they don’t get to do whatever they want and complain that the new rules are “just too hard to figure out.” As usual, they try to put the shadow of blame on us by characterizing our complaints as vague and arbitrary.  They attempt to cast us as insensitive by insinuating that we’re no longer receptive to “nice” gestures.  Other guys feign ignorance and innocence and claim the nuances are just too difficult for the average guy to comprehend.  And still others are just hateful sexists who don’t care whether they make us uncomfortable and use the controversy to fuel their misogyny.

My favorite comments are from guys who very obviously understand what is suitable and what isn’t but claim that “There are just too many gray areas.”  Really? I think in most cases the gray areas are products of willful confusion.  For every guy who truly is trying to understand where the boundaries in his professional relationships should be, there are two guys who profess not to know whether or not they should be putting their hands on the thighs of young female employees. “What?  That’s a problem?  I can’t believe you’re faulting me for showing a gesture of comfort to my young, inexperienced subordinate.” Right.

For these poor, well-meaning, caring individuals, I offer the following test.  Cut it out and hand it out as necessary when this question arises.  When a guy is really confused about whether or not to do/say something to one of his female colleagues or employees, tell him to ask himself the following questions:

1.  Would you tell your wife about it?

2.  Would it be okay if another guy did/said it to your daughter?

3.  Would you publish it in your church bulletin or company newsletter?

If a guy starts to come up with clarification questions or comments (i.e. “Do you mean would I describe it in detail?” “Does it matter how old my daughter is?”), you know he doesn’t really want to know the true answer.  Those are the guys who aren’t really asking to understand – they’re asking to try to prove why their historic pattern of behavior was okay.

On the other hand, there are a lot of very nice, caring guys out there who actually are concerned and well-meaning when they put a hand on your shoulder to ask if you’re okay.  They tell you that you look fabulous today because it always puts a smile on your face.  And they help you with your coat and give you a hand to get up from your chair because they weren’t raised by wolves.  We have to appreciate the good intentions and manners lest we drive them away forever.

Actually, communication is a tool that men easily could use in these situations, but they don’t.  If a man is not sure if it bothers his young female protégée when he takes her hand to help her out of the car, he can ask her.  Direct communication is a revolutionary concept, but is rarely used, particularly by people in the engineering profession.  (We’re not known for our social prowess).  We women have to be receptive to such questions and answer honestly.  If it looks like your boss is trying to be a good guy, help him out.

The concept that actually is difficult to grasp for men in supervisory positions is that a subordinate woman might feel she has to comply with whatever her boss does or she’ll lose her job.  This feeling may not be evident to the boss…at all.  But a 22-year-old brand new female employee is still a novice in the world, and her perception of the power structure at work might lead her to believe that her job would be in jeopardy if she expressed how she felt about her interactions with her boss.  As such, the boss should ALWAYS err on the side of caution.  Is it really necessary to pat a young engineer on the back when he tells her she did a good job?  Must he tell the young project manager that she looks great in that outfit?  It’s not essential to the job and the supervisor doesn’t know the employee well, the answer is no.  If it’s going to create all of this mental angst and confusion (for both the supervisor and the employee), why do it?

As a caveat, it should be stated that there are many, many male and female professionals who have longstanding friendships with members of the opposite sex, (contrary to what you learned in When Harry Met Sally).  Theoretically, if you have a good friend who is not your superior or subordinate, the lines of communication are open, and a guy can ask a woman, “Can I put my hand there or does that offend you?”  If she can’t give him an honest answer, they aren’t really friends.

The problem of sexual harassment is not simple, and no one set of rules can answer every conceivable question.  But the cat is out of the bag, the worms are out of the can, the grout has busted out of the pipe.  We need to have a real dialogue with those great, quality guys we work with every day, to help them understand how to move from unsuitable cultural customs to behaviors that benefit all of us.  For the rest of the guys, the ones who “just don’t understand,” we’ll make flash cards.