How Did You Get Here?

Diluting Workforce Quality for the Better…Or Not 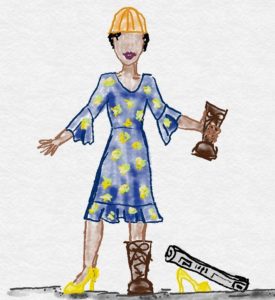 How did you get where you are?  No, I’m not referring to your route to work this morning or whether you took a plane or a train to get to the conference you’re attending or how you managed to sneak out of the office to go shoe shopping. (But bravo to you, and find me some of those cute Jeffrey Campbell mules, would you?) How did you achieve your position?  Was it years and years of 80-hour weeks and steady promotions? Did you take advantage of an equal opportunity hiring program?  Or did you poison your previous supervisor?  Don’t worry – there are no right answers here.

A friend of mine who works for a large company recently told me that her engineering manager decided the company needs more female engineers.  She then was told that a recent hire of that very gender would be joining her group and would report directly to my friend.  Hooray, right?  Do that girl power cheer right there at your desk (or in front of the Manolo Blahnik display).  This could be considered particularly good news given that my friend is quite the glass ceiling breaking pioneer herself. But, alas, her expression as she relayed the news didn’t hint at any joy.  In fact, she was downright moribund.

After I persuaded her that tomorrow was another day and those Yankees can’t hurt us anymore*, she explained that the new hire was less than sterling.  In fact, she was difficult to work with, defensive, unresourceful, and prickly. These characteristics had revealed themselves in short order as soon as the new employee had started work.  In fact, administrative personnel even had complained about her.  And now my friend was tasked with molding this young professional into a productive and valuable team member.  Have you ever tried to mold brick?  My friend was understandably torn between wanting to advocate more women in technical positions and envisioning numerous scenarios in which a freak act of nature demolished the company building and her new hire was the only unfortunate casualty.

This situation highlights the always pertinent question of whether equal opportunity programs are a help or a hindrance. It is an intensely complicated issue, and the answer varies significantly based on the year and the location.

Many years ago, highly qualified (and pleasant) women and minorities didn’t have the opportunity to even apply for many jobs, particularly positions in technical fields.  There was no question of unqualified applicants slipping through the system because most women and minorities couldn’t even get close to the system.  Applying for a job was almost a humorous proposition.

A prime example is a very prominent geo-structural engineer who applied for a position at a consulting firm in the early 1970s when she graduated from engineering school.  She reported to the firm’s office and chatted with the principal engineer for a short time about the company and what type of work the firm did.  As lunch approached, he apologized profusely and said a job emergency had come up and that his secretary would be taking her to lunch.  The young engineer happily went to lunch, not knowing whether such an occurrence was normal or not.  When she returned to the office, the boss found her, apologized again, and said it was time to talk about her desired position.  He then led off by asking how many words a minute she typed.  “Excuse me?” she said, confused.  “I don’t really know.”  He was appalled that she didn’t know and asked how she possibly could expect to get a job without being able to present her credentials.  She timidly inquired how typing would figure into an engineering job, which brought the boss up short.  “You’re here for an engineering job???  But you’re a…I mean…Are you serious?”  Rest assured our outstanding young engineer left that interview and went on to do quite fabulous things.  She still doesn’t know how many words a minute she types.

In such an environment, it was necessary to pave the way to allow women and minorities a chance at, well, a chance. I can say from personal experience that the interviewing environment is not so harsh today, and it wasn’t even that awful 15 years ago.

So the initial barrier has been broken.  Does that mean we still need help?  Are equal opportunity programs, both formal and informal, necessary? Or are we now setting ourselves backwards by forcing unqualified applicants into the pool in the name of equal numbers? Even worse, are we creating doubt about even the qualified candidates by diluting the quality of the overall disadvantaged workforce?  The answer is nowhere near easy.

Of course you could say that there are plenty of sub-par and unpleasant representatives of the white male workforce, so why should we be any different?  Maybe we shouldn’t be.  In fact, that’s the general idea.  If the percentage of women and men in any profession correlates to the general percentage of each gender in society, both groups should have some rude, insecure idiots in most fields.  But do we want to force our idiots into some roles just to balance the ranks?  Or do we want to reinforce our progress by concentrating on maintaining the quality of our gender in professional positions? As I said in the beginning, there are no right answers.

It is possible that the young lady my friend will be beating managing is brittle and defensive because she has grown up in a sexist, repressed environment.  She hailed from a small rural community, so maybe her original ebullient personality was dimmed by a barrage of oppression and denied opportunities.  Maybe she’ll turn into a shining star of an employee once she finds security and acceptance among her peers.  I’m a perpetual optimist, so I like to think this might happen to an upbeat soundtrack followed by a cygnet-to-swan montage showing her transformation into a new engineering star. This is the theory behind equal opportunity programs.

There is a stronger possibility that my friend has been saddled with her own personal albatross, and this young woman’s troubles are simply the product of really bad genes and bitter parents.  Although a great job opportunity can sometimes turn a person around, it is more likely that we will soon be making an advent calendar-ish wall hanging to creatively mark the days until her inevitable termination.

The question of equal opportunity probably is one that must be determined for each specific circumstance, defying convenient sweeping conclusions.  Should we throw a party someday when we can say that there are as many female idiots in engineering and construction as male idiots? (Minorities, I’m not going to speak for you, but you’re in the same boat). I’m usually first in line to plan any party, but I don’t know that I’ll be ordering the centerpieces for this one.

*In order to understand many of the references in my Underpinnings pieces, you really should be familiar with football terminology and the classics, starting with Gone with the Wind.  Move on to Love Actually, The Mummy, When Harry Met Sally, and The Devil Wears Prada after that.  This is the bare minimum, but I can provide a full curriculum upon request.