Are You Sure About What You Didn’t Say? 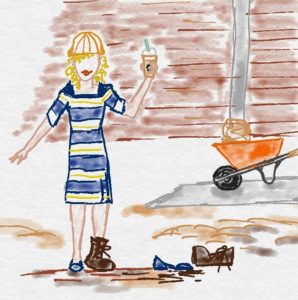 By Guest Contributor Lori Simpson, (who we’re 90% sure is CGG (Chief Geotechnical Genius) at Langan)

On a recent conference call my headset microphone wasn’t working and I couldn’t speak. Many people on the call didn’t notice the difference, well, because how often do women speak up on conference calls…or in meetings for that matter? Ok, ok, don’t get indignant. Of course we women speak. Some might say we are Chatty Kathys (no knock on Kathys) or that we “pick a little talk a little, pick a little talk a little, cheep cheep cheep talk a lot pick a little more.” (Any fans of the Music Man? I played Miriam’s mother in my middle school production). So how did we women get the reputation for talking too much when we don’t speak up enough?

They say that a woman needs to be 90% sure about something before she speaks up but a man only needs to be 10% sure. I see this in meetings all the time. When I was a junior engineer, I would go to meetings with a senior engineer (male, obviously, as there were no female senior engineers in my world). I would practically kick him under the conference room table because of some of the stuff that would come out of his mouth. No, he wasn’t being disrespectful; he was saying things that were flat out incorrect. As the junior engineer, I knew the details of the project,so I would know when he was wrong. Later, as I became the lead geotechnical engineer… (I’m not going to say I was senior, because well, that would speak to my age and we aren’t going there in this post…although there has been some previous discussion about my age, and I will speak to that in another post someday)…okay, where was I? Oh yes, being the lead engineer and sitting in meetings. Every time a question came to me I would take time to think and slowly respond with an answer that had a lot of qualifiers: “if”, “likely”, “might”, “could”, etc. Basically I knew there there was not an absolute answer (in geotechnical engineering there never is), so I made it clear that I was not asserting one definite position. So often in these meetings I would get a sense of dissatisfaction about my response. I think I was dissatisfied too. How come I couldn’t give a definite answer like EVERYONE else in the room? Note that everyone else was male (I’m sorry if I keep stating the obvious…but hopefully it’s not that way now so our younger readers might not think it’s obvious). It wasn’t because I was shy. It wasn’t because I felt like I shouldn’t be there. It wasn’t because I didn’t know what I was doing. So WHY?

At one point I attended a conference called Groundbreaking Women in Construction. This conference is alive and well and you should go. And while you are there, call me because it’s always in SF and I would love to meet you for a drink. But I digress. I attended a panel on the different leadership styles of men and women. This was the first time I had ever heard about this -what? Men and women are different? This was an eye opener. I mean, I grew up in the era of Men are from Mars and Women are from Venus, but I had never read it, and I didn’t think it applied to the working world (maybe because I had never read it?) One of the things that was presented was that women need to be something like 90% sure and men need to be only 10% sure before speaking up. GAME CHANGER!

I knew that when the senior engineer spoke incorrectly, he was saying what others wanted to hear—a confident answer. I also knew that he didn’t know all the details so he couldn’t give the entirely correct answer. What I didn’t know was that him knowing just enough about the project meant that he felt confident to give an answer. After that conference session, I noticed what was happening. All the men in the room knew just enough and spoke freely and sometimes incorrectly. The women (ok, woman) in the room wasn’t always 90% sure so she didn’t speak up…or when asked, gave an answers with lots of qualifiers so that the 10% she didn’t know was covered.

So does this mean that the outcomes of meetings with all or mostly men are based on an inadequate amount of information? Does it mean that the wrong conclusions are made? I would say generally no. Maybe it takes more meetings to get to the final answer because if you only know 10%, it might take you 10 meetings to get to the solution. And because women aren’t speaking up, even though they know 90%, they aren’t helping everyone get there. I don’t really believe in this math, but it makes me wonder -should men be more prepared and consider their responses before they give them? Or should women be more willing to “go out on a limb” when they don’t have all the information? On the one hand it seems obvious that the men should be more prepared and only speak up when they know more about the subject. And if a woman actually speaks up, you should put 9 times more weight on her answer. But I think there is value in the “brainstorming” method that I think occurs in meetings with men.

Ultimately, my observation is that people want you to speak up. They want to hear what you have to say. You are there for a reason, hopefully at a high billing rate, so contribute. You can put in an “if” or a “likely,” but they want you to sound confident. You might give the reasons why it is not a sure thing. Or you might say that this is the way you think it should go but there are some risks that you can explain. Either way–be confident.

After I heard the 10%/90% philosophy, my competitive nature erupted and now I try to speak up in meetings just to compete with the men for airtime. I watch how interruptions are made and how they speak over each other and join in the fun. And as long as I know at least 10% about what I am talking about, I’m on equal ground.