Hey – Your Ambition is Showing 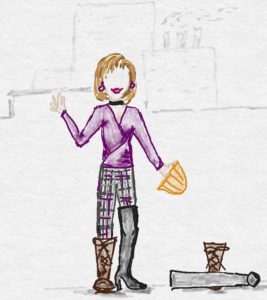 (Editor’s Note: Ann is a top-level manager for a major international manufacturer.  Someday we will all be working for her, and that’s not a bad thing.  Although she is not in the deep foundations industry, she spends all day every day with men, most of them engineers.  It’s no wonder her right brain takes over on the weekends, doing things like starting one of the most successful food and beverage festivals in the Midwest and coaching girls’ soccer).

The other day I sent Peggy a screen capture of an article I was reading that made me think of her.  What I subsequently learned is: Be careful what you text your friends who have a blog that is topically relevant… I’m kidding.

The article I sent was Reese Witherspoon’s recent essay in Glamour on ambition (Glamour October 2017).  The screen capture itself highlighted a study that single female Harvard MBA students downplayed their career ambitions in front of male classmates for fear of possibly hurting their marriage prospects.  I’m not trying to share business that isn’t mine (we’ll get to my business later), but Peggy had a dating experience in which her full life and busy schedule were questioned by an unnamed gentleman in the following way— “But don’t you want to be happy?”  Dear God… what year is it?  Hence, why I sent Peggy the screen capture, and hopefully a much-justified chuckle.

Reese writes an eloquent essay on the topic of ambition.  The fact that she had to is somewhat saddening to me; but, at least we’re talking about it.  At one point she states “Run away from a man who can’t handle your ambition. Run. So many men think ambition is awesome and sexy!”  I agree Reese, but a lot of men don’t wear “I find drive emasculating” on a T-shirt to the first date.  You learn that the person in question says one thing and actually wants another over time—sometimes a little time, sometimes a lot of time.

In my case, I learned it slowly– death-by-a-thousand-papercuts-style over the course of four years.  In my early twenties I dated a guy who, at the time, I was very much taken with and it seemed that the feeling was mutual.  He talked a great game; I mean a great game.  When we talked about my career ambitions there wasn’t a whiff of hesitation in his voice.  He seemed to be genuinely into my ambition.

Things eventually crashed and burned during a period of time when his career was floundering.  I, by contrast, was in the middle of two masters’ degrees and a career that wasn’t floundering.  I’ll spare you, dear readers of Underpinnings, all the gory details but, in hindsight, the thing that made me the angriest was that I found out he had been cheating on me with the Sunday school teacher from his family’s church.  The. Sunday. School. Teacher.  The cheating alone was a bitter enough pill to swallow, but the chosen partner was really the icing on the cake.  Don’t get me wrong, I’m guessing she didn’t know I existed. (If she did, the irony there is on an almost incomprehensible level).  Upon Monday morning quarterbacking the whole situation, it is my assumption that his need for that relationship was to shield his ego from the uncomfortable mirror I held up to his own lack of progress.  Perhaps that’s me shielding my own ego from the fact that my relationship crumbled because I couldn’t pull off the perfect balancing act of non-threatening and go-getter.

The thing is that I had never hid who I was and, in the beginning, it was the greatest thing ever.  By the end, the look on his face all but said “wow, you’re really like this all the time”… and not in a good way.  Did he think I was lying in the early days?  If I had been, wouldn’t that have been worse for everyone?  These are questions not worth pondering.

So, I was the MBA-educated girl who did not tamp down her ambition.  If I had, perhaps I could have nursed that relationship along for a bit but, in the end, I’m sure it would have come to a similar demise.  Regardless, there are lots of different ways to interpret the Harvard study.  Maybe the women being interviewed thought “What’s the harm in softening the wording here?  I can still go get it done; that’s my business”; or, “These questions rarely go well for me so here is my canned response”; or, “Remember when you beat that boy in the math bowl in middle school and got uninvited to the dance on Friday?”.  There are a lot of possibilities but, in the end, what a difficult commentary on the state of gender equality.

Judith Warner, who is a senior fellow at The Center for American Progress writes “Although women have outnumbered men on college campuses since 1988, they have earned at least a third of law degrees since 1980, were fully a third of medical school students by 1990, and, since 2002, have outnumbered men in earning undergraduate business degrees since 2002. They have not moved up to positions of prominence and power in America at anywhere near the rate that should have followed.  In a broad range of fields, their presence in top leadership positions—as equity law partners, medical school deans, and corporate executive officers—remains stuck at a mere 10 percent to 20 percent. Their “share of voice”—the average proportion of their representation on op-ed pages and corporate boards, as TV pundits, and in Congress—is just 15 percent.  In fact, it’s now estimated that, at the current rate of change, it will take until 2085 for women to reach parity with men in leadership roles in our country.”  With statistics like that, who can blame the women of Harvard?

Later in the article Reese comes back to “All we can do to create change is work hard. That’s my advice: Just do what you do well. If you’re a producer, you’ve got to produce. If you’re a writer, you’ve got to write. If you’re in corporate America, keep working hard to bust through the glass ceiling. If you want our voices to be represented in government—and I think we’re all getting behind that idea now—encourage women to run and help them with their campaigns. If you are one of those people who has that little voice in the back of her mind saying, “Maybe I could do [fill in the blank],” don’t tell it to be quiet. Give it a little room to grow, and try to find an environment it can grow in.”  I couldn’t say it better myself.