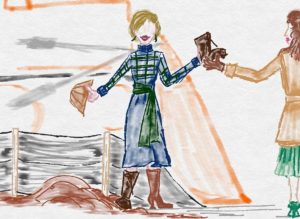 (Editors’ Note:  Lori is our hero.  You can read her brilliance here.  If you are lucky enough to meet her in person, pay attention).

The “Member Voices” article in the May 2019 ASCE Civil Engineering magazine hit home for me. Hannah Workman, a student at Fairmont State University in West Virginia wrote about sexism in engineering. No, this is not what you are thinking—she was referring to a different kind of sexism: the kind that we women perpetrate on each other. Her angle was about senior female engineers who show favoritism or give a preference to male engineers over female engineers. After giving some examples, she concluded that it is a territorial issue: senior female engineers were probably the only one at their firm and had to fight just to obtain that spot. They would see other women as competition.

I am a senior female engineer. I have been in the industry since 1986 and have often been the only woman in the room (or jobsite). This still happens, so I know many of you can relate. There are many reasons why having limited diversity on a project may not result in a project’s best outcome – not enough diversity of thought or experiences can prevent some great ideas from coming out. But there is another effect that happens, and I am here to testify to my own shortcomings: I take pride in being the only woman in the room. There. I said it. It is a badge of honor that I have enjoyed wearing, and if I am being really honest with you, deep down I still do. Being the only woman in the room means you are tough. The problem is that you can only wear this badge if you are the only woman in the room. The side effect of this situation is that I did feel competitive with other women and did not do what I could to help other women achieve in their careers.

The good news is that I am working on reforming myself, with the help of many of my peers in the industry. Initiatives like DFI’s Women in Deep Foundations (WIDF), the SE3 Project, AIA’s Equity by Design, and my own company’s Women@Langan have opened my eyes and are providing me strategies for mentoring and advocating for women. When WIDF had its inaugural meeting, one of the women in the room asked, “How many of us come to the DFI conference and never say hello to other women?” Guilty. Even at a conference I felt competitive with the handful of other women there (glad to say – there is way more than a handful of women at DFI now). As I am confessing this, it seems so silly – it’s not like I’m competing for attention from the men at the conference. I was competing to be the Toughest Woman. But guess what? It turns out that it is way more fun when there are many of us. Now I revel in walking into a room and seeing LOTS of bad-ass women.

So I realized that I need to help make this happen, especially in my position as a senior female engineer in the industry. At first I thought that because I figured it out, others would too–that just being an example was sufficient. I saw a lot of smart, hard-working women around me and figured they would know what to do. But when you really start to talk, you realize that you need to tell your story. And while we have a lot of shared experiences, we learn from how we each dealt with them. So I tell the stories of being out in the field with no proper facilities, being the only woman on a construction site, not being listened to. I share how I got the flexibility I needed while raising my daughters, how I advocated for fair pay, and how I presented my qualifications to get the promotions that I sought. I talk about how I developed my confidence, my voice. It’s not bragging—it’s making sure we know we aren’t the only ones going through this.

I’ve also realized that I can use my hard-won position to advocate for change.  I can give a hand to those women working up the ladder, both in my company and in others, because one of the spoils of being a Tough Woman for so many years is that now I’m part of the decision-making team.

So let’s keep the conversation going. If we don’t help each other out, we are perpetuating the isolation of women in our field. Madeleine Albright said, “There is a special place in hell for women who don’t help other women”. I don’t want to end up in hell.