Taking Charge of Your Presence 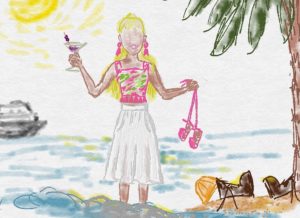 During the writing of this post, in which we decried The Spread, I happened to be talking to a member of the Underpinnings community.  When I mentioned the subject of the post, she said, “I would never say anything if a guy did this.  I always just try to make myself small in most situations.”  A few weeks later, I heard an interview with a movie director who talked about making herself small in a relationship.  In other words, she had tried to shape her existence to be most convenient for her partner.  She had recently made the realization that she was purposefully minimizing any of her needs in order not to seem needy or a bother, so that her partner would find it more appealing to be with her.  Making herself small also involved playing down her accomplishments so that he wouldn’t feel lesser.

With exceptions, women often have a natural instinct to take care of others.  Our roles as caregivers are hard to turn off, and we don’t stop watching out for those around us when we finish wiping noses and changing diapers.  (Yes, that includes wiping figurative noses at work). As such, we don’t think about what we do to ensure the comfort of others.  That guy on the plane is more comfortable when he Spreads, and part of us wants him to be comfortable. So often we sacrifice our own comfort and needs in our actual caregiving roles, and this tendency bleeds over into our interactions with others for whom we are not responsible.  It’s just an instinct.

But beyond our nurturing inclinations, many of us also don’t know how to take up for ourselves, either subtly or aggressively. We have been told for so many years that nice girls don’t demand things for themselves.  Nice girls go along with the situation and adapt and accommodate.  Oh, isn’t she a saint? We’re told that it’s aspirational to be a martyr.  News flash – martyrs are annoying and hard to be around.

Another member of our Underpinnings community also mentioned to me that she had changed jobs because she didn’t feel like she was appreciated and she didn’t think anyone at her company cared about her future there.  Another company made her an offer, and the attention and interest were impossible to resist.  Someone was paying attention to her career needs! After she left, she realized that she never actually sat anyone at her old company down and said, “I really like it here but we need to discuss my path forward.  I want to know how we’re going to make me an integral part of the management team.” She thought they would be looking out for her needs, and she worried how it would look if she took aggressive control over her own career.  She moved on to greener pastures, and unfortunately found Astroturf.

Yes, it’s a vital part of being a human to be considerate of others.  We all should look around and think about what our friends and family and co-workers need and want.  But we should not do this to the exclusion of our own needs and wants.  It’s certainly critical to any relationship to be a good, supportive partner.  But no healthy relationship is one-sided.  Ignore the “I-just-do-everything-for-my-family” crap.  You’re setting a bad example for your kids, particularly your daughters, if you give up everything for everyone else.  Do you want them doing that in 15 years?  It may make good Instagram copy (“Just spent 8 hours getting these huge blisters hand-digging and building my kids their own wading pool/splash pad. #supermom #mypainisworthit”), but it’s an unbalanced, unhealthy approach to life that will leave you feeling frustrated and resentful.

If you are not giving voice to your feelings because you are afraid your partner will view you less favorably, you are not giving the relationship the chance to be as strong as it could.  If your partner really would think of less of you for expressing your needs and emotions, you don’t need that person. Even worse, if your partner is someone who needs you to build him/her up by minimizing who you are…….you REALLY need to get a new partner.  No, no – don’t make excuses.  Anything you could say I’ve said myself before, and it was wrong.

We need to stop expecting others to respect us and appreciate us and help us only when they intuit that we need something.  We need to be more direct in voicing our needs in a fair and balanced way.  This doesn’t mean demanding attention or screaming at the guy next to you who is encroaching on your airline space.  There is a happy medium between suffering in silence and launching into a tirade.  And we need to feel comfortable walking into a meeting or working on a jobsite without feeling like we need to be small so that no one uses words like “pushy” and “bitchy” behind our backs.

In our careers it is vital that we make ourselves the opposite of small. Those above you should know that you are staunchly committed to an upward career path (as long as that’s the case).  Stating your goal is not “pushy” and “unattractive,” despite what you might have read in a magazine at some point.  Trust me, whoever runs your company wants people on board who want to succeed.  And they aren’t sitting around trying to figure out what you want and need – they don’t have time.  So tell them.  And give them a chance to help you realize your goals.  Success in business takes time and communication, not mind-reading and fence-jumping. Bosses are like spouses – they rarely know what you’re thinking unless you tell them.

4 Responses to Being Small