We Need a Little Happy 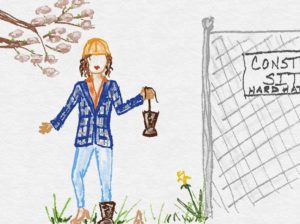 Oh. My. Heavens.  Is the world trying to put us in a bad mood?  Have you had a few dark weeks lately?  Apparently the coronavirus is going to kill us all, and even if it doesn’t the news media is going to scare us into canceling all events and not leaving our homes for weeks.  (As tempting as that seems…) And the elections are just a bit much.  Every time you turn on the news or click on a story, people are yelling.  They’re yelling at each other, they’re yelling at crowds, they’re yelling at us.  Could someone please tell the candidates that every event is not a pep rally?  Seriously – I will vote for the first person who simply speaks in his/her inside voice for two straight days.

(Update:  This post was written and scheduled before the public health crisis grew to its current proportions.  The mandates to stay home are warranted, and no parade or basketball tournament is worth losing the life of someone you love).

So, as you’re sitting on that tiny plane next to a coughing man who’s wearing a Straight Outta Wuhan T-shirt and the inflight video is a replay of the Democratic debates, I thought perhaps we all could use some happiness.  I promise not to yell.

In the geo-related business, we all have an everyday awareness of geologic time.  Geologic time is that great ruler by which we express how insignificant many things are.  If geologic time were a day, people would have existed only in the last second – you’ve heard this sort of analogy, right?  We talk to clients about the fact that this “new” sinkhole has been developing for millions of years.  We tell our kids things like, “You think I’m old?  Let me go out to my truck and get you some samples of Devonian shale.  Now that’s old!”  We are nerds, and it puts things into perspective when we think about how long the materials we’re exploring have been around.

I would like to use a similar relationship to tell you all why we should be celebrating today.  Bear with me.

People(ish) appeared on this planet about 5 million years ago, give or take a few million years.  Homo sapiens evolved over 50,000 years ago.  According to the most recent calculations of people who do that sort of thing, our current population is approximately 7% of all the people who have ever lived.  So about 94 billion people lived before us.  If 51% of those people were women, that means almost 48 billion women came before us.  Using some completely sketchy and non-anthropological assumptions, we’re going to estimate that at least 90% of those women lived in a patriarchal society, because women are smaller than men and brute force ruled the day.  So 43.2 billion women lived before us in male-dominated environments.  I think you would be safe to say that of the 3.8 billion women living on Earth today, at least 30% of them still live in completely oppressive conditions.  So in summary, (which is likely several decimal places off), the women in today’s progressive cultures represent only about 6% of all the women who have ever lived.

We spend a lot of time talking about the problems that still face us in our male-dominated workplaces, but, seriously – 6%!!!  Of all of the women who have ever lived, 94% of them had it a LOT worse than we do.  They couldn’t own property.  They couldn’t vote.  They could be raped or beaten, and it didn’t have legal consequences.  If they were raped before they got married, their futures were ruined through no fault of their own. They were traded for power and disregarded.  They had no legal worth.

But we do!!!  We can vote.  We have jobs that we want.  We can own our own houses.  If we are attacked or even sexually harassed, we are able to press charges and seek damages and justice.  We can decide not to have children and we won’t be at risk for being tossed out into the streets as worthless.  We can have credit cards and stock portfolios and bank accounts, and no man has to oversee all of this.

Can we take a minute to celebrate this?  Yes, things might be much better in the future, but they were much much worse for a good portion of a past that is much longer than our short memories.  And WE get to be here for it. Our grandmothers couldn’t open their own credit cards, but we’re allowed to charge enough shoes to max out our credit limits.  And we don’t have to have anyone else around to monitor our spending habits.  Our great grandmothers could lose their houses if their husbands died, but we can live out our days lounging on our fabulous wrought iron furniture in our fabulous parterre gardens next to our fabulous country houses bought from our earnings from our fabulous jobs.

We need some happiness right now, so I want to initiate a little campaign to honor what we have.  I am proposing that we all do the following (choose all that apply):

1-    Charge something (because you can).  It doesn’t have to be from the spring line of Manolo Blahnik, although we’ll all bow down to you if it is.  You can buy $3 lip balm to give to your preteen daughter.  Or you can buy a copy of Garden and Gun magazine to enjoy with your morning coffee.

2-    Sit for 10 minutes and study the platforms of the presidential candidates, because you get to VOTE!  You may end up doing a write-in for Sarah Jessica Parker so that we get Universal Footwear, but you can still honor the fact that you get to be part of the process.

3-    Take a photo of part of your house or apartment or condo to commemorate the fact that it is legal for you to rent or own property.

4-    Take a photo of your office or save a business card to memorialize the fact that you were able to have the job you wanted.  You might hate your current boss, and there’s a possibility that you’re going to poison all of your co-workers during the next lunch-and-learn, but there’s no law that says a woman can’t be a insert your job here.  There’s also no law that says that you can’t leave this job and get another one.  In fact, you can change your profession completely if you want.

A moment of silence and a smile will be enough to commemorate these moments.  If you’re into social media, put up a post with #notonestepback*.  (Feel free to tag me on Instagram – @peggyhagertyduffy.  You can also tag me or Helen on Facebook). That’s the order Joseph Stalin gave his troops in 1942 when the Russians were being invaded by German soldiers.  We need to hold the same hard line.  Now is the time to be happy about what we have, because there are plenty of dark forces trying to bring the world down.  We’re stronger than that. We’re going to honor what it took to get here, and we’re not going back.

*Note – For you diehard history people, use of this slogan does not mean we’re going to execute retreating troops.  No one will be shot.  We just liked the decisive spirit of the order.