Are You a Feminist?

What Does That Even Mean? 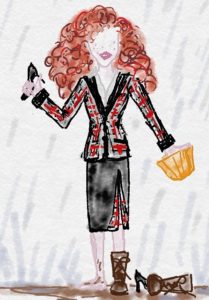 Are you a feminist?  What exactly does that mean? And is it important to you to identify yourself as such?

Megyn Kelly, former Fox News host and current NBC news personality, was widely derided in 2016 by her refusal to label herself as a feminist.  She stated that the term had become divisive and had negative connotations. Many women took that position as a cop out and an avoidance of the true issue: that being branded a feminist would alienate many of the average Fox viewers. They said that she needed to stand up for women as a whole, even if it meant losing her job at Fox.

So what does the average bear think a feminist is?  The simple answer (obviously) would be that a feminist is a person who believes that women are equal to men and should be accorded the same respect and opportunities.  But, unfortunately, many years of history have colored individual perceptions.  In addition, the actions and words of some in the heat of the battle on inequality have generated a decidedly negative vision of what a feminist represents and who she (or he) is.

Gloria Steinem no doubt was the trailblazer in the modern world of feminism, though not the original pioneer by a long shot.  Elizabeth Cady Stanton and Susan B. Anthony were the Lewis and Clark of the equality wilderness, raising issues and bucking the norm long before Ms. magazine challenged the accepted role of women in U.S. society. Julia Ward Howe, Ida B. Wells, Sojourner Truth – these women functioned and rebelled in conditions we can’t even imagine. They made people face truths and answer questions that weren’t comfortable or conventional. Thanks to them, you’re sitting at your desk working on a tieback design or standing on a construction site yelling at people about clean bottoms.

Organized feminist actions in the 1970s compounded this stereotype.  The bra-burning, tie-wearing, loud, angry women that demonstrated for equal pay and equal opportunities reinforced the notion that feminists are rude, unfeminine, “coarse” ball-busters who don’t like men and have no interest in being nice to them.  In fact, they want reparations for 12,000 years of oppression.

It’s often so easy to forget that people who start revolutions have to overcome years, decades, centuries of inertia.  Society has been functioning as X, and now someone wants it to be Y.  This doesn’t happen easily.  It takes anger, it takes aggression, it takes breaking out of stereotypes just to get people’s attention. Changing the average person’s mind is another mountain to climb once you have their attention. It’s no wonder the early feminists seemed angry.  They were trying to get people to listen! They were TIRED!!!  They were exhausted from trying to overcome centuries of societal inertia.  They were worn out from attempting to use logic to overcome fear and emotion.  They were frustrated from worrying that they would be unsuccessful.

Despite the reason, the negative stereotype of a feminist still exists with many people. The purpose of all the hard work of Ms. Cady Stanton and Ms. Steinem and the others was to allow us all to be equal, regardless of who we are.  They didn’t mean to support just women – they intended to establish equality for everyone.  Purple, three-headed Martians would be accorded the same freedoms and rights as WASP males and women of east-central northern Irish descent who were born on the subway. But the residue of the battles remains, and the feminist brand often is not a positive one.

Some modern women, particularly those of a certain age, believe that to resist the feminist label is to abandon the cause.  You are a failure if you don’t embrace the title and forge on with the battle. But are you?  Do we shirk our duties as progressive women if we don’t deem ourselves warriors?

On a personal level, I have a serious problem with being given any label (except that of a University of Louisville Cardinal). Whether the label is true depends on how you define it.  You might define it differently than I do.  Beyond the definition, I might decide that I want to change in the future.  The issue might change.  DO NOT TELL ME WHO I AM.

I also don’t like the idea that being a feminist means tipping the scales against men.  Equality means equality, not “We should get lots extra to make up for all that crap in the past.”

Here at Underpinnings, we have noticed an interesting development in this label issue.  Younger women in our field are not as comfortable making a fuss about equality or their rights in the workplace, and they often aren’t ready to proclaim themselves feminists.  In some cases, it’s because they don’t see their world as that bad.  It’s not, because we’ve made progress. In other cases, they see us more seasoned professionals as being too confrontational and ready to raise hell.  (See my previous comments on being exhausted from fighting the battle for so long). To them, the idea of being a feminist smacks of unnecessary and insensitive crusading.

In the case of Ms. Kelly, I believe that the whole point of feminism is to get us to the place where women can do what they want with their careers.  When she was at Fox, she wanted to be at Fox.  Was she wrong to monitor her language so as not to alienate the very audience she wanted to court?  Yes, you say – she has an obligation to do what’s right for the advancement of all of us.  Does she? Maybe the success of feminism is that she can express her opinion, whatever it is, and she gets to be the person to figure out what strategic moves she needs to make to have the career she wants. Whether that career is worthwhile is her business.

A necessary component of succeeding in war is unity. When the war is over, troops often have a difficult time establishing themselves as individuals, particularly if the issues from the war aren’t completely resolved. There is even fear of functioning outside of your unit, outside of the war.  The need for determination and grit are so compelling during the battle that to give it up seems suicidal.  Those women who fought the hardest of the wars of the past no doubt fear we will lose all the ground we’ve gained if we give up for even a second. They say that women are traitors who won’t go by the name “feminist,” lest we all end up back in the kitchen, illiterate with no freedom.

Perhaps we need a new word, one that represents our goal of equality for all, which was the original purpose.  Allofusist?  Everyoneist? Peopleist? We need to refocus on the fact that we celebrate women, not that we denigrate men.  And we need to acknowledge that one of the spoils of this war was supposed to be our right to call ourselves whatever we want and carry out our personal and professional lives however we want. Ms. Kelly doesn’t have to call herself a feminist as far as I’m concerned.  It won’t affect my ability to be what I want, which of course is a Cardinalist.