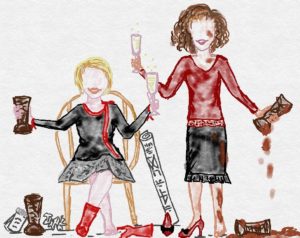 A little over a year ago we decided to do something crazy, and Underpinnings was hatched.  We have built up a fabulous community, and we hear every day from one of our “skirts in dirt” how much they enjoy reading others’ stories and how much it helps them to know they’re not alone in the universe.

We deal with heavy subjects on a weekly basis, and we hope that we have helped make some progress in the world.  But celebrations are not the time for serious conversations and heavy discussions.  So we want to have some fun.

The flip side of the trouble involved with being a woman in a male-dominated field is the pure entertainment value.  Most of us have been in some ludicrous/ridiculous/hilarious situation that stemmed from the fact that we were the only skirt at work. And not only is laughing good, but it’s important to recognize the positive side of our unique situations.

Underpinnings is celebrating our first anniversary with a contest.  Yes – a contest!  Below you will find a funny story from each of us.  We are asking you to submit your favorite funny story from your life as a pink dot in a field of blue.  The winner will receive a fabulous basket full of inspiring, weird, funny, sparkly gifts worthy of the effort we all make.

Entries are due by midnight, December 15th.  A winner will be announced on Wednesday, December 20th.  You may ask us to remain anonymous, if you would like, but we hope everyone feels like this is a safe space.  Don’t worry about whether or not you write well – that’s not the point.  We’ll clean up any little issues if necessary before we broadcast your hilarity to the world. E-mail your entry to underpinningsgeo@gmail.com.  We can’t wait to read them.  In the meantime, here are some examples.

My story has less to do with being a woman and more to do with just being me and sometimes overthinking things a bit too much. Recently, I was headed down to the Washington D.C. office of my company for the first time.  I successfully navigated Amtrak from Wilmington to Union station in D.C. as I have often done before, bought a Metro card and located the appropriate line, and got off to walk several blocks to the office. I had worn comfy slip-on sneakers for travel and planned to change into heels when I arrived. I also planned to slip into a bathroom to apply lipstick and make myself presentable. When I entered the building I found it was the type to have a doorperson where you sign in as a guest and they swipe their keycard in the elevator and press the floor number for you. I felt it would have been quite awkward to avail myself of the bench in the lobby to change shoes and freshen up, so I mentally adjusted my plan to find the bathroom first when I arrived on the floor.

Having spent the last 15 years of my career in offices in suburban PA, I had forgotten that city offices often have separate locked bathrooms with a key available as needed to the office tenants on each floor. I stepped off the elevator, found the restroom, and got the stark reminder.  So I scanned around for other options and found the next best thing- a door leading to the stairwell.

In the stairwell I completed my shoe change and used my cell phone as a mirror to fix my makeup. Satisfied, I gathered my briefcase and purse and turned to exit.  That’s when the cold reality hit- the door handle wouldn’t move.  I was locked in!  Noooooo! What were my options? Continue down many flights of stairs back to the lobby, but what if it ended in an emergency exit or something? Climb up or down to see if all the floors were locked?  Likely futile, and then I would have to get back on the elevator again which probably wouldn’t let me select the floor I needed.  So, I had to bite the bullet and call the office to have someone rescue me.  The office manager answered and failed to suppress her astonishment that I was locked in the stairwell. She came to my aid and reassured me that no one in the office was a stickler for dress code.  I happened to glance down at her feet- she was wearing rain galoshes.

I spent about ten years doing construction-phase engineering for several hundred transmission structure foundations.  Often the jobsites were in very remote locations that were only accessible via old logging roads or park service paths or yellow brick roads to magical wardrobes in vanishing train stations.  Even more often the construction crews resembled the Pirates of the Caribbean crew with corresponding charm and social skills.

One particular project was on a steep peak east of Morehead, Kentucky, three hours from my house. Concrete was an hour away and placement typically involved getting the truck situated in some non-OSHA-approved arrangement. Construction started at the beginning of December during a year in which Kentucky had experienced more than its annual snowfall total by December 5th.  None of the concrete truck drivers wanted to come to the site, so dispatch often “lost” the order for the day.  Days were long and made even longer by the fact that my husband (at the time) had decided it was more dangerous for me to stay in a motel in eastern Kentucky than to spend six hours on the road every day in addition to 10 hours on the site.

The crew on this site was nice and minimally endowed with cartoon-worthy facial features.  Not a single guy wore an eye patch.  Three of them were under 25 and quite taken with having a “girl” on the site.  One gentleman in particular appeared to be smitten with me, an amusing fact considering that I usually was covered in mud and bleeding from some random tie wire/rebar injury.

The third week of the project the amorous worker became more aggressively charming.  I made frequent references to my husband, to no avail.  He was never touchy or obnoxious, he just flirted a lot and let me know how much he admired my intelligence, my boots, (yes, boots), my understanding of different kinds of mud, and my ability to drive in the snow. Our last concrete pour was scheduled for that Friday, so I figured we would finish up and that would be that.

The last day of the job, more snow blew in.  By noon, we had several inches on the ground and visibility was low.  My admirer was unusually distant, but I figured he was just trying to get his work done amidst the bad weather.  Oddly enough, the superintendent on the job was not rushing at all and kept backing the concrete plant off.  “It’s Friday!” I kept saying.  “If we don’t pour soon the drivers will all have their 40 in and we’ll get no concrete.”  Nothing. The afternoon crept on and the only person seeming to be experiencing any anxiety was my “boyfriend.”

Finally, about 3:00, with snow driving in my face, I turned around when I heard an odd noise.  There on one knee was the amorous crew member.  He had taken the pine tree air freshener from his truck and folded it into the shape of a rose, and he was holding it out to me and serenading me with a country song about soul mates. (The image is still emblazoned in my brain).  Stunned, I said, “Oh, sweetie, that’s lovely.  But I’m married.  And more importantly, we have to get concrete in the ground.” He stood up, gave me the “rose,” and said, “Well, you know where to find me.”  Still stunned, I turned around to find the superintendent there watching.  I couldn’t think of anything intelligent to say, so I just asked why we still hadn’t poured concrete.  He got a big grin on his face and said, “That boy has been mooning at you for three weeks.  He thought if concrete was late today you would have to stay overnight and he could make his case.  I told him I would play along as long as I could, but we’re starting to get some cave-ins, so I gave him a deadline.  I’m all about true love, but I’m not digging these holes again.”