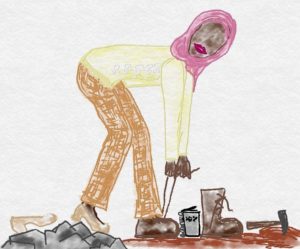 I was raised in a small family of women – mom, gram, two aunts, and a few cousins.  My family had started out with some men, but the year I was two my grandfather and uncle died and my mom left my abusive father.  I remember the women around me as strong, self-sufficient, generous, flexible, but only at times sensitive and outwardly loving.  They all encouraged (and expected) me to do chores (lots of cleaning and mowing the lawn), to explore (keeping pet worms and having areas of the yard I could turn to mud factories), and to stand up for myself.  Most importantly, I think, to who I am today – they expected me to do what I wanted to do, regardless of what those around me said.  But here’s what I’ve been pondering lately…I think what I took from their lessons was to react, not to respond.  My pattern of reaction (and not response) led me to where I am in my career.  I’m (generally) happy with how my career has worked out but I wonder how it would have been had I responded more and reacted less.  So now I’m starting to look at how I can respond to career situations and move forward with intention, not just reacting to situations with a gut reaction.

Reacting is what we instinctually or quickly do when an event or a decision or a confrontation happens.  To me, reacting happens when I see something unjust or am exposed to a hard situation – and become angry or defensive or hurt.  It also occurs when I see something as a challenge and charge forward to meet it head-on without much forethought.

Responding takes more effort and involves thinking things through.  Responding means I keep my calm, think about what happened, and make an active, conscious decision about the best course of action (or inaction) to take.  Responding isn’t always slower than reacting (though it certainly can be) but it is always about seeing a bigger and different perspective around the situation.

The most vivid memory of me reacting as a kid was in kindergarten (although it’s one of those memories that is now warped by my mom’s telling me about it so many times, so it’s a blend of my memory plus her story).  It was free time and a boy (Brad) told me I couldn’t walk on the desks.  Now maybe he meant that I shouldn’t, or that it wasn’t appropriate to stand on desks in school.  But I heard him tell me I couldn’t do it and so I immediately took it as a challenge. I climbed up on the little kindergarten sized desks in my Catholic school jumper and walked around from desk to desk while the class looked at me in surprise.   As you can expect, I was told to get down and to go to the principal’s office.  My mom came to pick me up and asked what happened.  I said Brad told me I couldn’t walk on desks and so I did.   She told me good, that’s what I should have done!  (And then followed it up with a discussion about appropriate times to walk on desks – i.e. not in class.)

Flash forward to college…end of my sophomore year and I had taken a variety of general classes but had not yet declared a major.  My advisor told me I needed to pick a major now.  I made my decision there and then in his office, and chose geology.   Don’t get me wrong, geology is a good fit for me, but I didn’t do any long-term planning – I didn’t do any of the things I’d advise anyone who was choosing a career!  I didn’t research options, would I need a master’s, what field of geology would I go into, what geographic region would I live in?  I had taken “Geology for Consumers” the prior semester and it had included a field trip (as all good geology classes should). But something sparked in me that day when the class got out of the school van on the side of a road on top of a hill (all very much a typical day).  That was the day I learned that I wasn’t just standing on a hill…I was standing on a drumlin! (A drumlin is an elongated hill formed by glaciers.)  The hill got there somehow.  The valley got there somehow.  There was a process, a history, a predictable order to the landscape around us.  I’m pretty sure that’s what my gut reaction was stirring up months later in my advisor’s office.

Ok, so I chose geology as a major.  A year in and my new advisor suggested I double major and add in geophysics.  I saw it as a challenge and agreed right away.  Agreeing meant adding a year onto my undergraduate work, and it meant taking a slew of math and physics classes as well as geophysical coursework.  Then I chose a graduate school and landed into the research that my advisor suggested.  I was content, happy even.  I got a job, moved, got married, had two babies, and kept working.  All of this just happened as a series of my reactions to events that presented themselves to me.  Each time I took the next logical step from where I was at any given moment.

But now I’m trying a different way.  A few years ago while struggling with a loved one’s addiction, I learned the phrase “Respond, don’t React” and I applied it consciously in all aspects of that relationship.  It helped me distance myself from the craziness of addiction enough to take care of myself.  I eventually could see my loved one with a different perspective and it helped me continue to love them even amid the craziness.  It helped me feel calmer, more in control of myself.  In the past year I’ve had some challenging interactions with clients and staff, and one day the phrase “Respond, don’t React” came to me again. I realized I could apply this to my career as well – mainly in my day-to-day interactions to keep my calm and not do anything I’d regret!

Now I’m looking at my long-term goals and I’ve had the revelation that I can respond in situations and with decision-making to lead me to those goals.  It had never occurred to me before the last couple months to me to write down career goals, and then to actually do something to achieve them.   I’m not sure why this concept wasn’t part of my life to begin with – seems like it should be standard…have goals, do things to achieve them.   But I can see now that a lot of my childhood was observing the women in my life reacting to their situations – grieving, moving on, getting out, raising kids, making ends meet.  So many years of just doing the next logical step led me to this place, here, right now.  It’s a pretty decent place.   But now I want to try responding to the next career crossroad, situation, choice, and goal.

I’m a geologist and geophysicist for a civil engineering company.  Much of my thoughts lately (when not focusing with all my might to meet deadlines, or to snuggle my boys, or to not be late for date night with my husband, or to keep our pet goldfish alive) are looking at how the decisions we all make shape our careers and the careers of those around us – particularly for women in an industry with mostly men, and for men in an industry with only a few women. Thanks Helen and Peggy for having me be a guest, it felt nice to have thoughts and to then write them down!  Maybe there’s a pattern here.

One Response to Patterns for Success