Are These Our Only Two Choices? 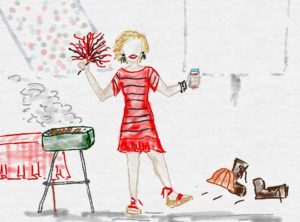 No doubt you have taken part in at least one discussion, if not endless discourse, on the cultural rift we have today between our Millennial generation and the rest of the world in the working environment.  Trust me when I say I understand why this division exists, because I have analyzed and investigated and listened until I can’t stand to hear the phrase “work-life balance” one more time.  I get it, and I understand it.  Whether or not I agree with many of the current recommendations for coping with it is a minefield for another time.

Pertinent to our exploration of perfection here at Underpinnings is a thread that runs through most examinations of why Millennials act the way they do – the idea that we, the parent generation, are at fault.  As a friend of mine so aptly put it, “We always swore up and down that our kids wouldn’t have to work as hard as we have.  Well, they don’t.  At all.”

Before this turns into an ugly digital brawl over whether or not Millennials are worthless slackers or hapless victims, (do you love the fact that those are the only two choices?), I would divert your attention to the same hypothesis, but for a different issue.  Are we, the parents of the next generation of brilliant women, promoting perfection at the expense of personal growth and societal improvement? And are we doing it to spare ourselves from pain?

Many of us in the GenX and Baby Boomer categories have fought some bloody battles to get where we are and to smooth the way for women behind us on the moving sidewalk of life.  We remember when a woman would have very little recourse if a man on a construction site said something vulgar or, worse, didn’t pay any attention to her engineering recommendations.  We’ve had our asses grabbed and our chests groped, and we have been on the receiving end of drunken kisses from superiors at professional events.

So things are better now, right?  And that’s a good thing, right?  But are we, ourselves, sabotaging more progress by reinforcing the notion of perfection in our daughters, our protégées, and our co-workers?

The connection between the quest for perfection and problems with sexism have played around the edges of my brain for a long time.  There was something there that was truly bothering me, and I knew it was a very basic, very ugly problem.  It took a lot of runs and hours on the Treadclimber to jar the pattern out of my observations.  When I finally felt like I had made the connection I was sensing, it came down to two issues: stereotypes and sex.

Yes, we cheer on young women now in a variety of previously male-dominated fields.  If you are the top of your class and you get promoted to district manager at 25 and you receive an award for Young Contractor of the Year, the world will give you a medal and call you legitimate.  But if you are a female and you’re not in the top 10% of your class, chances are you will not get a rousing round of encouragement to “go for it.”  Why?  Because we all know that even in 2018, a woman has to excel to be considered average in a man’s world.  A woman who does not excel will not be considered average, she’ll be viewed as dead weight.  So, as often occurs, her loving family discourages her from moving forward in a career environment that they know will be difficult.  Our message: If you’re not brilliant, you’re a failure.  Even worse – if you’re not brilliant, you need to settle for being just a wife and mother.  (As if being a wife and mother is easy or unimportant or settling). Why are there only two extremes?  Because parents and mentors don’t want their loved ones to be hurt.  So we drive drive drive the young ladies to get perfect grades and be class president and captain of the lacrosse team.  And when our daughters get average grades and express interest in “unimportant” things like teaching or fashion or interior design, we write them off.  (Where would we be without teachers???) Or when they get average grades and still want to be engineers, we discourage them.  It will be too hard, we think. Being who they are isn’t enough to break the glass ceiling, so being who they are isn’t enough. We then relegate their career importance to whatever children they may someday have.

I work with a lot of men who aren’t very smart.  (Insert jokes here). Many of them are successful because they work hard, they’re creative, and they come up with unique solutions to problems.  There’s no reason to think that a female engineering student with middling grades couldn’t achieve in the same manner.  But we know she’ll be underappreciated at the start, and we don’t want her to get discouraged.  So we recommend different routes.  We imply that anything less than perfection isn’t good enough to join our sisterhood.

The other side of this issue involves our personal, not professional, expectations of our younger generation.  One could (try to) make the argument that some parents press their children of both sexes to be top notch academically and give up when they aren’t. But no argument can be made that we view our daughters and sons equally when evaluating their personal decisions.

Take pregnancy. Obviously, all parents and mentors want their young people to become parents when it is appropriate and feasible financially.  (Spoiler – it’s never financially feasible to be a parent).  But if a boy gets his girlfriend (or Friday night hookup) pregnant, chances are his family will be upset, but mainly concerned about how he’ll be able to support the child and how it will affect his future.  If a girl gets pregnant by her boyfriend, her family is worried about the same things, but they are also ashamed.  They are disappointed in her.  As much as you can try to say that the concern is just about her future, 9 times out of 10 the parents and friends are disappointed in her moral choices.  She let someone touch her.  If the boy was a Friday night hookup instead of a boyfriend, the shame is tenfold.  You can try to say all day long that all of the crying is about practicality and futures and finances, but you cannot deny the fact that many parents will look at their daughters differently in these situations.  She had sex.  Everyone will know.  So they push their daughters to be perfect.  Don’t dress improperly.  Don’t flirt.  You don’t need to pay attention to boys, you need to study. Isn’t it great that my daughter isn’t interested in boys?

A sad component of this problem is our own selfish worries about what others will think.  “They’ll think I’m a bad parent.” “People will know my daughter decided to have sex and they’ll think less of me.”  Needless to say, such concerns are shallow and only reinforce sexist societal attitudes.

Along with shame from pregnancy comes fear of our young women being seen as sexual beings at all.  Our sons get lucky with a hot girl at work?  At least one person will say, “Atta boy.” You find out your daughter had sex with a construction worker on one of her sites?  Instead of, “Well, that wasn’t brilliant, but making mistakes means learning,” we say, “Who knows about it?  Oh no.  You’ll be ruined.” (No one EVER says, “Atta girl.”) In many cases, she will be ruined.  Because we, the older generation, are freaking out about the fact that an adult woman in a free society made a choice.  Again, you can say all day long that we are just trying to protect her, but perpetuating double-standards isn’t protection.  It’s fear.  We are limiting our daughters’ freedom because we are afraid they’ll get hurt, and that hurt will hurt us.

Our over-protection is just another version of trophies-for-everyone, no-grades-until-fourth-grade, and gifts-for-every-party-guest.  Our generation and the generation before us got where we are by dealing with the ugly side of sexism in the workplace and in society.  If we want progress to continue, we have to allow the current generation to participate.  Let your young protégée take that job with that nasty old superintendent, and let her figure out how to show him who’s boss.  She’ll probably make some mistakes, and she might even end up quitting the job, but at least she got out there. Support your daughter when she admits that she hates school and she’s always dreamed of being a magician on a cruise ship and VIEW HER CAREER AS VALID.  Treat your niece like the shining star she still is when she comes home from Coachella pregnant.  She is a smart, strong, ball-buster, and she’ll figure out a way to get her PhD in agronomy with a toddler on her hip. We have to stop telling our girls that their only two choices are perfection and mediocrity.  And we need to respect them as the fierce individuals that they are instead of trying to cram them into some ideal that helps us sleep at night.