I Just Want It To Be Perfect 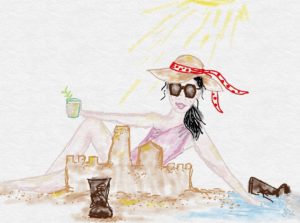 When I was young I used to haul around a sketch pad with me everywhere.  I spent hours and hours drawing…dresses.  I was fascinated by fabric and design and endlessly intrigued by art that one can wear.  As I grew older, I found out that my passion for art was balanced by my interest in science and engineering.  I thought the Great Pyramids were beautiful, but I also constantly found myself saying, “But how did they build that?” I think you know which direction I chose when I hit the unavoidable fork in the career road in college.

My artistic beginnings are probably some of the reasons I’m such a big fan of the TLC show “Say Yes to the Dress.”  No, it’s not the family drama.  It’s not the suspense. (Will she find a dress?! Or will she go to her $150,000 wedding in a sundress from Target?) It’s truly the dresses.  At the end of a long week when I’m trying to decide if I want to be an engineer again on Monday, I can sit on the couch on Friday night and say, “Ooo – look how well that drapes!”

On the other hand, the quickest way for me lose my Friday night happy coma is for one of the brides to implore, “But I just want it to be perfect!” This statement typically is said in the same tone a defeated peasant uses as she watches the invading army ride into town – “I just hope they let some of us live!”  The desperate brides who use this phrase lead us to believe that their lives will be over if every detail in their weddings is not exactly as they have envisioned it.  The cynic in me often yells at the screen, “You mean not perfect, as in something might happen that you haven’t imagined in your short, limited little life?  Something that might be better than what you dreamt of in your narrow-minded pursuit of an impossible goal but that you’ll be too myopic to appreciate?!” Okay, I try to keep my blood pressure low by ignoring this part of the episodes, but sometimes I can’t help it.  And it seems as if this illusion of perfection is everywhere these days.  It drives me crazy.  More importantly, it seems to me that the goal of perfection is much more prevalent among women than among men.

My distaste for this idea of perfection turned into a more mature interest when I heard this TED Talk.  Throughout Ms. Saujauni’s presentation, I kept saying, “Yes! Yes!” The idea of having to attain perfection is much more than a dramatic moment on a Friday night reality show. Her insights made me see that my revulsion on Friday nights was a response to a much larger condition than simply a tulle vs. silk predicament.  Soon after I listened to her talk, I read this post . I think both ladies have very similar messages, and I think we need to sit up and take notice, for our daughters’ sakes.

Human beings are, by definition, imperfect.  Our world also is imperfect.  We might use the word with abandon when it comes to spring days and d’Orsay heels and men who play James Bond.  But the truth is that none of those things and none of this world actually are perfect.  And those who pursue the nonexistent are doomed to the frustration of futility.

So why do we ask our daughters to be perfect? Why do we encourage them to attempt only things in which they have some chance of succeeding?  Why do we do everything in our power to protect them from making mistakes? Why are we so petrified that they will make mistakes?

As a perpetual optimist, I like to think the root of this problem is in biology, not in maliciousness.  As our species was becoming established, it was necessary for women to be as “perfect” as possible to be attractive to potential mates.  Women who did not reproduce and who weren’t married often did not have the protection of a man and could end up in dire straits. Families wanted to make sure their daughters didn’t end up poor and at the mercy of a less-than-benevolent society, so they pushed them to be without any possible flaws that could be construed as unsuitable for a potential mate.

This anthropological analysis (without any expertise to back it up), would explain an 1850s frontier family’s extreme concern over their oldest daughter’s penchant for wearing men’s pants while doing her farm chores.  In 1850, the negative reaction from the rest of the people in the small prairie town could lead to more than just some counseling sessions over bullying at the general store.  Being unmarriageable on the frontier could lead to problems for the whole family, including lack of protection from hostile raids and exclusion from pooling of resources.

But this isn’t 1850.  Even if your grandmother scolds you that you won’t find a man with hands that dirty (I proved her wrong more than once), the family is not likely to end up starving and surrounded by pirates/bandits just because you spend your days smeared with unladylike mud from various construction sites.

And yet, we continue to hold onto this idea of perfection.  We cringe at the thought of our daughters doing anything to generate negative attention.  If I hear “But in this age of social media, their mistakes will follow them everywhere” one more time I’ll scream.  Yes, your mistakes will be preserved for all eternity, but so what?  They are mistakes.  By teaching our daughters that mistakes should be avoided and covered up at all costs, we are telling them that they are not okay if they make a mistake.  We are saying that evidence of a mistake made 15 years ago might very well ruin an entire life.  And, in doing so, we discourage them from taking risks.  We teach them not to be brave.

I would be willing to gamble some hard-earned pennies that most of the women reading this post who have succeeded in engineering or construction careers have felt during at least part of those careers that they could not make any mistakes.  They knew that any one mistake, whether it be professional or personal, could spell the end of their careers.  After all, there were many men just looking for reasons as to why those women shouldn’t be in their jobs.  A mistake of any sort would provide just the ammunition a misogynist would need to say, “See?  I told you she didn’t belong here.”

When was the last time you heard about a guy who slept with his secretary or his foreperson or his IT expert and it didn’t affect his job.  The answer is yesterday.  Even better, when was the last time you saw a male co-worker get completely ripped at a company party and dance around with the proverbial lamp shade on his head?  Again, the answer is yesterday.  Many people would say, “Wow, that guy…” as they chuckled to themselves.  But the philanderer and the drunk both would keep their jobs.  “But, he’s good at his job, right?”

Now put a woman in both of those scenarios.  She’s not going to survive either one of these incidents.  Because both involve mistakes.  And both involve a lapse in judgment, which we are not allowed to have.  “What else will she do?  She might end up sleeping with the whole second floor IT department!  And if her judgment is bad in this area, how can she possibly size a beam for a load test?  Off with her head!”

So we tell our daughters to be strong and ambitious and go get a great career….as long as they do it perfectly.  If any mistakes are made, we’ll hire social media experts to wipe away the evidence, and we’ll spirit the girl off to an isolated location for trauma control. Yes, go get that engineering degree from Berkeley, but be sure to get straight As and make sure you agree with everyone you encounter.  They’ll call you a star if you’re perfect! Of course, you’ll never have an opportunity to learn from any mistakes, and your risk-avoidance will prohibit you from trying anything new or innovative.  But have a great life!

Is this what we want?  I know I don’t.  Over the years some of my most spectacular mistakes have taught me the most.  And I don’t want the false sense of security that I’m only okay if I’m perfect, which I’m not.  (I think there is a full astral plane between me and perfection).

So what do we do about this?  Or do we do something about this – is perfection the right goal?  Stay tuned for Part II.