Inspiration is a Great Gift Idea 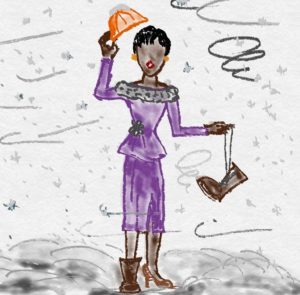 I count the last part of 2019 as a time in which we received a bounty of gifts to renew our hope in making the workplace equal for men and women.  I’m not talking about anything related to #MeToo or TimesUp.  These gifts were outstanding women setting fabulous examples for the rest of us.  Did you notice?  If not, allow me to elaborate.

In mid-November, I got into my car one day and turned on the radio.  If I had known the impeachment hearings were being broadcast live, I probably would have switched to the classical music station.  I hate to admit that, because I’m constantly torn, feeling like I have a responsibility as a citizen to know what’s going on.  But – ugh.  Just ugh.  The unending bickering between self-absorbed people who are only interested in keeping their own jobs is just exhausting.  If these narcissistic politicians who dominate the microphones actually cared about the country, the situation would be completely different, but here we are.

So, I flipped on the radio and was immediately met with the carefully modulated tones of Marie Yovanovitch.  The former Ambassador to Ukraine and longtime Foreign Service member was in the middle of her opening remarks, and I was mesmerized.  She articulately described her long work history, a resume that included multiple incidents where she had to flee a location under gunfire.  Her words and demeanor made it clear that she was a consummate professional and that she did what she did because she believes in our country.  Her commitment to protecting and advancing the U.S. through sound foreign policy was obvious.

As members of Congress began to question Dr. Yovanovitch, the subject of her dismissal from her diplomatic position by the President of the U.S. arose.  Multiple persons brought up the fact that the President said negative things about her to representatives of other countries, and he had put out ugly tweets about her during the hearings.  She went to respond to this subject – the subject of the abrupt end of her sterling career – and I heard her voice start to waver.  As she became obviously emotional, I instantly yelled, “Nonononono!” at the radio.  You CAN’T get emotional when you’re confronted if you’re a woman.  We all know that, don’t we?  They’ll use it against you, whomever they happen to be.  Don’t show that you care.  Never show weakness.

But Dr. Yovanovitch went on in the same manner, and the effects were simply, unexpectedly wonderful.  Most of the hearing participants already were blatantly hesitant to say anything negative to someone with such an admirable background.  Her display of emotion just brought it home.  Instead of going in for the kill, the questioners appeared to realize just how tragic the situation was and how much Dr. Yovanovitch had given for the country they were supposedly trying to save with their hearings and fighting and grandstanding.  Her emotion was absolutely appropriate and served to prove the depth of the commitment she had already described.

I learned something in that moment.  Yes, we still have to be careful about making sure ignorant men in the workplace don’t perceive us as “emotional.”  But we can’t let that keep us from expressing true emotions, particularly when they are well-placed and help people to understand our positions and beliefs.  Through her example, Dr. Yovanovitch proved something to the women of this country – you don’t have to hide your emotions and pretend like you don’t care to be taken seriously.

A few days after Marie Yovanovitch testified, I again unwittingly turned on the radio during the impeachment hearings.  This time, former National Security Council member Fiona Hill gripped my attention from her first sentence.  She was in the process of clarifying that, in case anyone was still misunderstanding, Ukraine did not interfere with the 2016 election, Russia did.  She didn’t hedge her statements or keep them general enough to cover potential gray areas.  In effect, she said, “Look, you idiots.  Russia interfered in our election in 2016 and they are on track to do it again in 2020.  This is not in question, and if you don’t get your heads out of your asses you’ll pay the price.”  It was FABULOUS.  She did not care if someone thought she sounded “too masculine” or if she might be perceived as a bitch.  She had plenty of experience to know what she was doing, and she had the data to back up her beliefs.  She was doing her job.  Let me repeat that – she was doing her job. The strength of her convictions and her own knowledge were sufficient weapons to let her do what she needed to do without worrying about what anyone thought about her delivery or her qualifications.  As someone I know said, “That woman is a badass.”

As the questioning continued, Dr. Hill did something that gave me a chill.  She addressed a situation in which she was wrong.  She stated that she was wrong, and she explained why she had drawn erroneous conclusions.  She didn’t over-apologize, and she didn’t take the entire blame for everything that had ever happened to the world.  She explained and moved on.  I was in awe.

Again, I learned something.  At some point you have to forget about “leaning in” and “seizing your power” and “being sensitive to others’ preconceptions.”  Sometimes you have to just do your job.  If you’re doing it right, and your eye is on the task at hand, all of the rest of the socio-political crap will be unimportant.  And if you make a mistake, own it, explain it, and move on.  Don’t give your detractors more ammunition by making too much of your mistakes.

The last ray of inspiration came in a dark movie theater in December watching “The Rise of Skywalker.”  I should mention that I was a huge Star Wars fan as a kid, and I related to the fact that Princess Leia worked hard every day amidst nothing but a sea of men.  No eyebrows were raised in 1977 when she was the only real recognizable female character in a string of three epic movies that included casts of hundreds.  What was remarkable then was that the princess was written as a character with power.  People listened to her.  Even though the men came to rescue her on a couple of occasions, the rescues were necessary because she was in the thick of the battles.  She wasn’t carted off as a prize; she was captured and tortured for information because SHE KNEW IMPORTANT THINGS.  In the late 70s and early 80s, there weren’t very many female leads that fit this bill, so she was my hero.

On December 19, 2019, I got to watch the latest installment of the series.  Like everyone else, I was burdened with the knowledge that Carrie Fisher died before the movie was made.  Unlike the early films, the most recent movies have been full of strong female characters, including generals and mercenaries and a woman who could be argued is the new hero of the saga (Rey), so it could be thought that Princess Leia wasn’t so important anymore.  But she started all this, and her place in the story felt personal. It has been widely publicized that the movie producers were able to use old footage of Carrie Fisher to keep her character in the movie, so I’m not giving anything away when I say that I felt something of a triumph when she came onscreen to give orders or to advise Rey.  As the movie unfolded, I’ll admit that I was a bit choked up and mentally said to Princess Leia, “We did it.  Look how different everything is now.  And it wouldn’t be if you and I and a bunch of other hard-headed women hadn’t worn ourselves out making sure all these other women could be here.” Although I did nothing to defeat the First Order, I still felt a small victory.  Little girls watching the movie now don’t have to think that a male-only work world is normal.

Now 2020 has started, and I feel like we have some positive momentum.  I’m looking for more sources of inspiration and hope and progress, and I hope you are, too.  Let us know if you have seen a ray of light that we’ve missed.  We all need the sunshine to thrive.

(Note:  If you did not hear or see any of the testimony of Dr. Yovanovitch or Dr. Hill, I recommend you watch some of the coverage.  Both women were rock stars.  And I strongly recommend that you watch Star Wars: A New Hope, The Empire Strikes Back, The Return of the Jedi, The Force Awakens, The Last Jedi, and The Rise of Skywalker, if you haven’t already.  Skip Episodes 1-3 of the series, as they are overcomplicated, convoluted messes that do not contribute to the narrative).