The Casualties Are Higher When It’s Personal 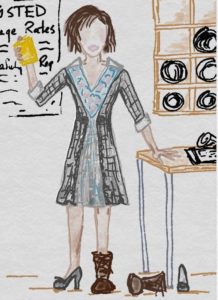 It didn’t take the #metoo movement for most of us to be familiar with being undervalued or disrespected or ignored at work or in school.  Even our youngest millennials who work in progressive companies with open-minded colleagues have run into ugliness at some point.  The trouble may have come from a backwards guy on a jobsite spouting obscene suggestions while he ignored your engineering evaluation of the problem with his soil nail wall.  You may have lost a promotion to a guy with less experience but who the boss felt more comfortable sending out to construction sites.  Or the issue may have been more subtle; a manager who professed to care about your career but who kept assigning difficult projects to others in order to “give you less stress.”

As we wade through these swine-infested waters, the implication is that all of our problems are work issues.  The offenders are people from families that aren’t yours.  The misogynists are other women’s husbands (bless their hearts). And when you leave the offensive situation at work, you get to go home to sympathetic people who love you and value you for everything wonderful that you are.

Yes, in the candy-canes-and-teddy-bears world in my head this is true.  We all have supportive, understanding partners and close-knit, warm families.  Diane Keaton will be playing your mom in the movie about how you took on the unequal power structure at your company and won, and Kelly Clarkson will do the soundtrack.

How often is this really true?  Using the analytical side of our personalities, does it make statistical sense that all of us fabulous women in our field would have enlightened partners and families?  Not a chance.  We have to be realistic about the fact that our career choices likely will make waves for us personally as well as professionally.  And it’s doubtful that there’s an HR office in your house to sort it out.  So solving your inequality problems with people you are tied to legally and genetically probably will be much more complicated than taking care of your work issues.  And much more painful.

I worked with a woman years ago whose father was an earthwork contractor.  He had raised his two sons to work in the family business, and neither had ended up working with him.  On the other hand, his daughter had spent her childhood begging to learn how to operate a backhoe, asking questions about grade stakes and stockpiles.  He told her that girls had no place in construction.  She tried for years, only to be rebuffed.  Finally out of high school, she chose to go to engineering school, hoping for a “backdoor” into her father’s world.  Sadly, he never accepted her.  His disapproval and lack of pride in his daughter’s accomplishments led to bitterness and anger in her.  When I met her she was in her late twenties, and her bitterness toward her father subconsciously controlled most of her actions.  She slept with men of whom she knew he would disapprove; she slanted all of her evaluations on jobsites against the interests of the contractors; and she measured every career victory in terms of what her father was missing. It was tragic.

Could she have changed her father’s longstanding opinions if she had tried a different approach? Could she have proven to him through actions that his outdated beliefs were wrong? We’ll never know.  They stopped speaking to each other years ago.

Many counselors and psychologists will tell you that insecurities are magnified a thousand fold with your “family of origin.”  This sensitivity can make rectifying a bad situation seem insurmountable.  The emotions involved can cloud reason and douse any flame of energy for being patient with ingrained prejudices and longstanding beliefs. With family, a woman must have a true desire to change her relatives’ beliefs and behaviors.  And she must have patience above all.  Because she is not just redefining another person’s beliefs, she is restructuring the family unit. Making progress may not always be possible, and it will be arduous when it does occur.

A relationship with a partner is a completely different issue.  A partner is someone who has been chosen. The implication is that the chosen person loves you and wants what’s best for you, no matter what.  Even if such a person would have outdated beliefs, they would be easy to convert to a more progressive mindset because they think you’re fabulous.

If only it were that simple.  As Annie Schmelzer said so brilliantly in this post, most guys don’t go around with a T-shirt that says they’re insecure sexists who will try to undermine you the minute they feel threatened.  Wait – threatened?  If you love a man and he loves you, why should he ever feel threatened?  If you really love each other (and you didn’t get together just because all of your other friends were getting married and it was “time”), you both want nothing more than the health and happiness of the other person.  Anything less isn’t real love.  But close-but-no-cigar love often comes disguised as real love.  Unfortunately, the voids usually don’t appear until it’s too complicated to just walk away.

My mistakes in this area have been spectacular, the product of my leap-before-I-look personality and my perpetual optimism. (Really? That alcoholic who flirts with me every time I come out on site doesn’t respect me?  But he said he likes me…) My longtime boyfriend in college was very supportive of my engineering career until I ran into a problem with a guy on my second co-op job in school.  When I told my boyfriend that I had brought it up to my boss, he said, “Hey – I didn’t sign up for any feminist crusade.”  A guy had just been extremely disrespectful to me, and all my boyfriend could think about was not being involved in a conflict.  And I was too stupid to get out of the relationship at the time.

Even though I broke up with that guy later, my obliviousness continued. Probably the most painful experience I had was when I got married to a man who professed to think that my job was “cool” and that he was proud of me. I had always thought that the best part of marriage was sharing yourself with another person, not being afraid that the other person will judge you or use what you share against you.  Both of you are supposed to always be on the other’s side. But what I found is that every time I did well at work, my husband would use something I had told him against me.  If I solved a dispute on a construction site, he would remind me that I had stomach ulcers and was “weak.”  If I gained a new client, he would work into conversation that I get my rights and my lefts mixed up often.  If someone else complimented me on my work at a party, he would tell the crowd that I told him how nervous I was when I had to deal with a particular client.  I didn’t recognize the pattern – or the motive – at first, but as time went on his comments became meaner and his acknowledgements of anything I did well fewer and far between.  Needless to say, he loved some idea of me, but not the actual me.  Not the me who wades through mud in deep sinkholes.  Not the me who changes her own tires and doesn’t automatically ask a man to perform tough jobs.  And being with someone who didn’t want me to be the best person I could, whether as a muddy engineer or in a more traditional role, wasn’t healthy.

As difficult as our professional problems with gender inequality may be, solving the same problems in our personal lives is far more complicated and burdensome.  The emotions involved can distort our perceptions of what is best for us and distract us from the truth in our lives.  There is no handbook, no company policy, no legal recourse for being narrow-minded in a personal relationship.  But we have our sisterhood in this, too, and we owe it to other women to support them when they need us, whether the problem is personal or professional.  People we love and who allege to love us should love us for who we are, not who they want us to be.  And just like in our professional lives, we owe it to ourselves not to settle for less.