Confidence of a Higher Order

Yes, I’m Supposed to Be Here 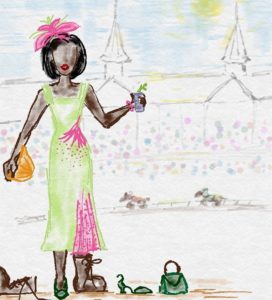 Confidence is a subject we have covered extensively on this forum.  It should not be a surprise to anyone currently engaged in our dialogue about women’s issues in a male-dominated workplace that a lack of confidence runs rampant through our ranks.  Yes, there are women who blaze a trail unencumbered by self-doubt, and they are our heroes.  But the rest of us continue to wage a battle for our place in the working world with compromised armor.

I am always fascinated by those women who sail through sexist-infested waters with no apparent recognition of the doubters and haters around them.  These are the women who don’t hesitate to state their opinions, do their jobs, and tell any obstructionists to get the hell out of the way.  So I study them in hopes that I might learn their secrets.  No retraining orders have been filed thus far, so apparently my approach has been anthropologist-worthy.  In any case, I have observed some of the most inspiring attitudes from a completely unexpected source.

The first twelve years of my education (plus kindergarten) were overseen and influenced by Roman Catholic nuns.  My grade school nuns were Ursuline Sisters, and my high school nuns were Sisters of Mercy.  In addition, my great aunt was a Sister of Charity. I still deal with nuns from a number of orders regularly at church and through charity work. I have the utmost respect for the dedication, work ethic, organizational skills, and focus of nuns as a whole.  (I left out integrity, honesty, humility, etc., because I think those are givens).  I’m also in awe of the fact that they tolerate spending their whole lives in boring, sensible shoes. That’s grit.

I cannot recall a single nun who appeared to be tentative or lacking in confidence when it came to executing her duties.  Yes, I have known sisters who were shy, but the vast majority in my experience have been downright commanding in their work lives.  I certainly never saw a nun defer to a man simply because he was a man. Surely you have seen or heard jokes about drill sergeant-like nuns as teachers?  Plays and musicals have been written about hard core, rigid nuns issuing orders and demanding respect from masses of obedient students and adults alike.

If you read the Outlander books, (and if you don’t, we cannot be friends), the author, Diana Gabaldon, wrote a passage in which the main character reflects on where she learned to have a commanding presence in her role as a battlefield nurse during World War II.  She observed nuns ordering soldiers around who were twice their size and gaining cooperation by not accepting anything else.  She learned by their example that if she barked an order and acted authoritative, many men would simply comply. In a major role in one of the books, the Mother Superior of a hospital in France directs men and women about equally, never giving either subordinates or colleagues the opportunity to disagree. The character would be called “fierce” in 2018, and she serves as inspiration for the heroine when she needs to marshal her courage.

It might seem a bit counter intuitive to look for help with confidence from a group of women whose very vows could be perceived as subservient.  They do not attain positions of commercial success in our society.  They are forbidden from accumulating wealth or possessions.  They are committed to advancing the work of their order and the church instead of their own desires.

But nuns are also some of the smartest and most well-educated women around.  Sister Mary Prisca Pfeffer, my former high school principal and English teacher, died at the age of 96 with more college degrees than I could count.  My great aunt insisted that my dad speak only in French during the summer so he could learn the language better.  And these two examples are just the tip of the iceberg.

So where does their example leave the rest of us?  More importantly, how do they achieve such confidence, and where can we get some of that?

Of course, part of the answer must include the fact that the sisters believe God is on their side.  How can you not go about your work with forcefulness and aplomb when you believe that your mission has divine approval?

But beyond the obvious, I feel that many nuns stride purposefully through their vocation because they truly believe they are supposed to be there.  Well, of course they do, you say.  That’s no revelation.  Otherwise they wouldn’t have taken vows and devoted themselves to the lives they have, right?  So, if they believe so strongly in their rightful places in their roles, why don’t we?

History, of course, is one answer to that question.  Nuns have filled the roles of nurses and teachers and missionaries feeding the hungry for years.  They don’t have to overcome the fact that there were few, if any women in their roles 50 years ago.  In fact, nuns are all women!

But what if we borrow their attitude?  What if we simply decide we’re supposed to be here?  We adopt that don’t-waste-time-arguing-with-me-because-it-won’t-do-you-any-good demeanor and make those around us believe it?

Before I learned that it was okay to be my age (see this post) I often joked that I graduated from college in 2007. I have told many people that others will be believe even something improbable if you look them directly in the eyes and sound confident in your statement.  Actually, that’s usually true.  So what if we just deal with others in the workplace every day as if it’s understood that we should be there (BECAUSE IT’S TRUE), and completely tune out any doubters. It would be even more fabulous if we could slap the knuckles of all of those doubters with a ruler, but I think there might be various local and federal laws against that.

I urge you to try the “Nun Approach” in your workplace this week.  Of course it should be accompanied by all appropriate courtesies, particularly if you work anywhere that could be construed as southern. (“Yes, sir, you have inadequate clearance around your rebar for shafts C12 and F7.  Those need to be fixed ASAP or your concrete is going right back to the plant.  Thank you for getting this done right now.”)

The most important part of this plan is the change that will take place in your own head.  If you don’t let anyone else stop to question your presence in your job, you’ll forget the question it, too.  Sister Mary Prisca NEVER let anyone question her authority or her expertise, and she was right.  I can diagram the previous sentence for you as proof. So we need to put her and other sisters on a pedestal and follow their lead.  We’ll just wear different shoes.